THE BERLIN CONFERENCE: How art deals with the carving of a continent (Exhibition Review: December 2014)

One of the images featured in the review piece (shown above) is a photograph of the installation ‘Laboratoire de Déberlinisation’ created by the Berlin-based Senegalese artist Mansour Ciss.This conceptual artwork was first developed by Ciss in 2001 and has been described by the artist as a project for encouraging trans-national ‘North-South’ and ‘Eurafrican’ dialogues about the politics of globalisation in the post-colonial era, and also as a symbolic representation of the intersectional space where “the idealism of art meets the realities of geopolitics and economics.”

Link to the full text of the exhibition review: http://www.contemporaryand.com/blog/magazines/how-artists-reflect-on-the-berlin-conference/

A video cast of ‘Laboratoire de Déberlinisation’ during its installation at Karlsruher Hauptbahnhof station in Berlin (2011) – also featuring role-play interventions, and interactions with the visiting public, performed by Mansour Ciss, Baruch Gottlieb and Christian Hanussek – is available online at the ZKM website: 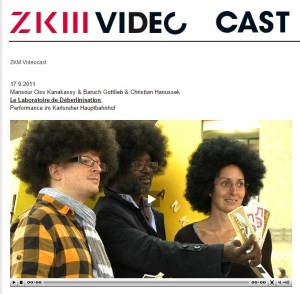 Link to the video cast of ‘Laboratoire de Déberlinisation’: http://www02.zkm.de/videocast/index.php/component/content/article/445-deberlinisation.html